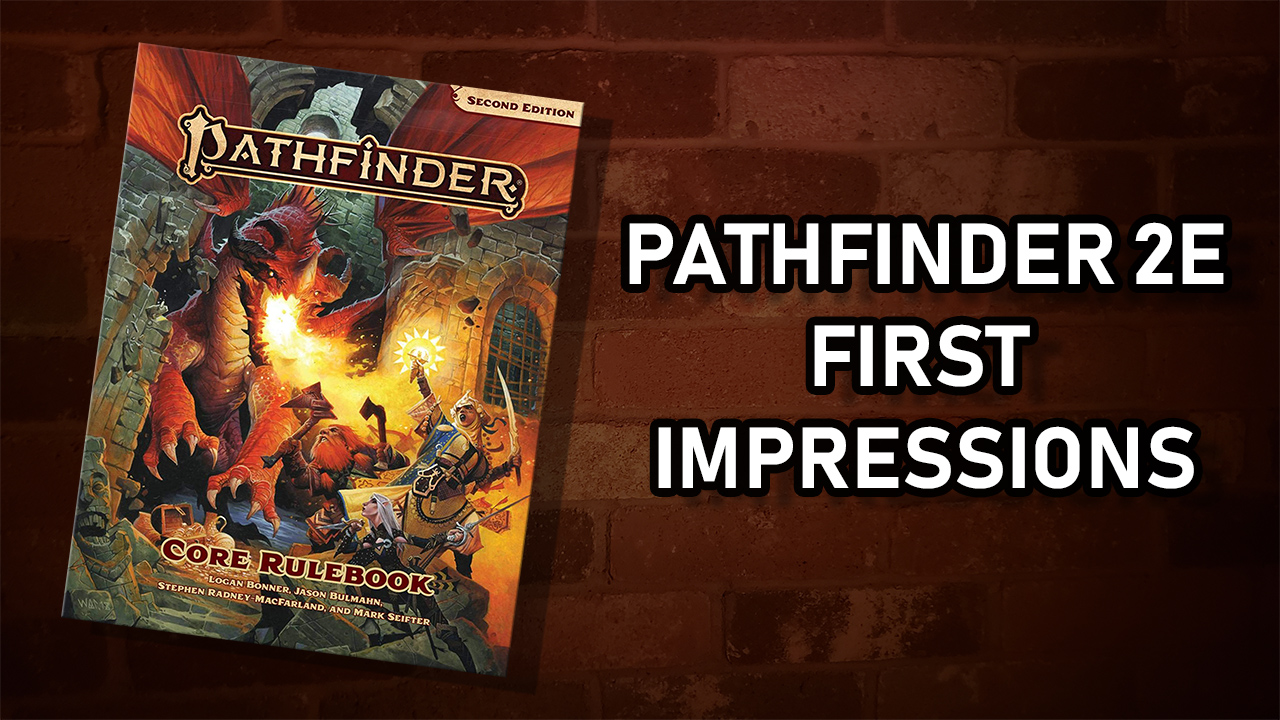 Our D&D Pathfinder 2E First Impressions video is up! That’s right, Paizo’s Second Edition of Pathfinder is finally released! Here’s a quick and dirty look at what you’ll find in the Core Rule Book. We will be doing more focused articles on various aspects of the game. These will include classes and an overview of the new Second Edition Bestiary as well!

Those two books together are all you will need to start playing your own adventures. But Paizo also offers Campaign setting guides (The Age of Lost Omens) and an upcoming book of optional rules and Game Master tips (The Game Mastery Guide) as well as pre-made campaigns and adventures.

In addition to the hardcover books, PDF versions are also available for significantly less than the printed price. This is a great option if you prefer a cheap entry or just don’t care for a physical book. Finally, all the rules and character options are available online. Check out Paizo’s officially supported System Reference Document (like a wiki for the game rules) at Archives of Nethys.

Background specifies what your character did before s/he began adventuring. It grants
A static Ability Score Boost, and one ability score boost of your choice
A Lore (formerly knowledge) skill proficiency, and another skill proficiency.

Class defines your character’s role in a party, the type of training or special abilities they possesses, and how they grow in that role and those abilities. Your class determines the bulk of how you will excel with that your character, including:
– Providing an Ability Score Boost based on the ability score most important to your class
– Health gained per level – a flat amount + Constitution Score Modifier, no more rolling HP
– Whether your character can cast spells, and what types of spells they cast, and how
– Weapon, Armor, and Saving Throw proficiencies, as well as Perception
– Iconic class abilities, like Barbarian Rage, Rogue Sneak Attack, or Bardic Performance
– Most classes offer a choice of sub-class or progression path
– Some classes may offer a bonus feat, either set by sub-class, or free for you to choose

Finally, select four more Ability Score Boosts, and any additional skill proficiencies or languages you may be entitled to based on your ancestry, class, or Intelligence modifier.

Leveling Up in Pathfinder Second Edition

Leveling up brings all the same power increases you’re used to. This includes: increased health, new spells or special abilities, and flat bonuses to proficiency (we’ll get to that, I promise!). What’s changed is the amount of choice you have in the process.

At every level, your character may gain 1 or more feats. You get Class Feats and Skill Feats (which let you get more out of your skills) at every even level. Ancestry or general feats at odd levels. These odd feats include miscellaneous feats, like Toughness to increase your HP, or gain proficiency in a type of weapon or armor.

Class feats might give new abilities (like the Ranger’s Animal Companion, or a new Bardic Performance) or give you new options with an ability (like special debuffs your Rogue can apply to a Sneak Attack).

At every odd level after first, you can also increase the proficiency level of one of your skills.

A lot has changed this time around in order to create a streamlined game. It manages to be homogenized for simplicity while remaining full of satisfying choices both in creation and in-combat options for all classes. There’s an awful lot of new here, but it would take a book to explain it all (like a Core Rule Book for example!), so we’re just going to highlight some of what we think are the most exciting changes.

Proficiency – Determines the bonus your character will get on their passive defenses or on their own D20 rolls for different types of actions. You may think you’re familiar with the concept of a flat Proficiency bonus if you play D&D 5th Edition, but Pathfinder 2nd Edition is a little different. Rather than opting for a binary yes/no proficiency system, Pathfinder uses five levels of proficiency.

As you level up, your proficiency in different aspects will increase at set rates based on class. Some classes may never reach high proficiency in some things. Casters aren’t typically great with weapon attacks. But they tend to get by well on their spell attacks and the increase to their spell Saving Throw Difficulty Class (DC).

Proficiency applies to almost everything. Your Armor Class (AC) with certain armors – or even unarmored – gets a boost from it, as do your attacks with weapons or spells. Your Saving Throws, perception, and all of your skills have their own individual proficiencies.

Pathfinder Second Edition has learned a lot from the past about how easy it is to lose track of what types of actions you can take and how they interact with each other to create your character’s turn in combat. To that end, everything your character might do has been assigned an action value. You have three actions to use as you see fit to create your turn. Some activities or abilities require more than one action. A standard weapon Strike is a single action, moving up to your movement is a single action, casting a spell can vary from 1-3 actions, but most spells require two actions.

Some classes can combine actions in special ways. For example, a rogue or a fighter may be able to move and attack in a single action with certain feats. A Barbarian may be able to attack with the same action it used to begin a Rage.

Some classes can take special actions which modify their next action, like a wizard using one action to prepare a metamagic effect, and then two actions to cast the spell which now benefits from that metamagic action.

In the three action economy, you can generally mix and match or even repeat actions as you choose. Some examples: moving twice before attempting to hide. Or, attacking with a weapon strike three times on your turn (suffering variable Multiple Attack Penalties based on the number and types of weapon used), and so on.

Finally, in addition to your three actions, you may be able to use a Reaction or a Free action

Reactions are special actions that you can perform when a condition is met. Even if it isn’t your turn, a reaction may be triggered. For an example, an enemy moving through the melee range of Fighter, Barbarian, Champion (formerly called Paladin), or Ranger which may trigger an Attack of Opportunity reaction from those classes. A Sorcerer or Wizard may attempt to counterspell hostile magic from another caster. A Champion may use a reaction to block an attack with a shield. Typically, each character is only permitted a single reaction per round but there are some exceptions.

Free Actions may be used at your discretion. They may also be triggered by an event or situation similarly to a Reaction. As with Reactions, different characters will have unique options for free actions which can be as simple as calling out information to an ally (“the guy in red stole the McGuffin!”) or more specialized mechanics like drawing a weapon with the Quick Draw Feat. Some Free actions trigger as a response to other events similarly to a Reaction. Your character may be able to make a Free Action and a Reaction in the same round.

This is just the tip of the iceberg that is the three action economy.

Most classes have access to a special resource called Focus. This resource is used to power some abilities that might otherwise feel similar to spells. These Focus abilities (called different things for each class) each burn one focus point. A character typically gains an additional focus point for every new ability gained that uses the resource. This Focus Pool of points can never exceed three. But in downtime you may be able to regain some amount of this pool.
Focus allows characters to have a limited but renewable well of thematic options (like the Champion’s Lay on Hands, or a Druid’s Wild Shape).

Second Edition Pathfinder has four very different thematic spell lists, each associated with a class.
Bards use the Occult Tradition, affecting minds, and creating mystifying otherworldly effects.
Clerics use the Divine Tradition, use spells gained from faith to aid allies and hinder foes.
Druids use the Primal Tradition, harnessing the natural world and its elemental forces.
Wizards use the Arcane Tradition, an eclectic list both powerful and varied.
Sorcerers may wield any one of these traditions based on the selected bloodline.

Every Class that gains a Magical Tradition gets full access to Cantrips and spell levels 1-9. But, they eventually gain access to at least a single ridiculously powerful 10th level spell. These spells can be used independently alongside any Focus spells that a character may have picked up from their class. Most spells don’t scale with level, but must be heightened to reach the most powerful versions by casting it with a higher level spell slot. Cantrips and Focus Spells scale automatically. But Cantrips especially are typically weaker than even the standard versions of higher level spells.

In addition to the wide breadth of options within your class, you have further options to customize your character. These options are called Archetypes. By spending your precious class feats on archetype feats, you can gain tools far outside the normal scope of your class.
The Core Rule Book only has rules for Multiclass archetypes, but further variations will be coming in future supplements. Still, it’s hard to feel limited when your fighter can opt to learn a few spells. Or when your Cleric can pick up an animal companion from the Ranger. Or your Rogue picks up a few tricks from the Alchemist to craft poisons to apply to weapons for deadlier sneak attacks.

It would be difficult to overstate how much archetypes can open up your character creation possibilities. It’s worth noting that you can even take multiple archetypes. Though, you may eventually find yourself spread too thin between 3 or more classes. Still, its nice that the option is there. The Frankensteined character combining several class options could certainly work with planning and be loads of fun.

Keep in mind we haven’t even come close to covering everything, this is just our D&D Pathfinder 2E First Impressions. Keep an eye out for more coverage from us in the near future! Click the video below for more on our first impressions!