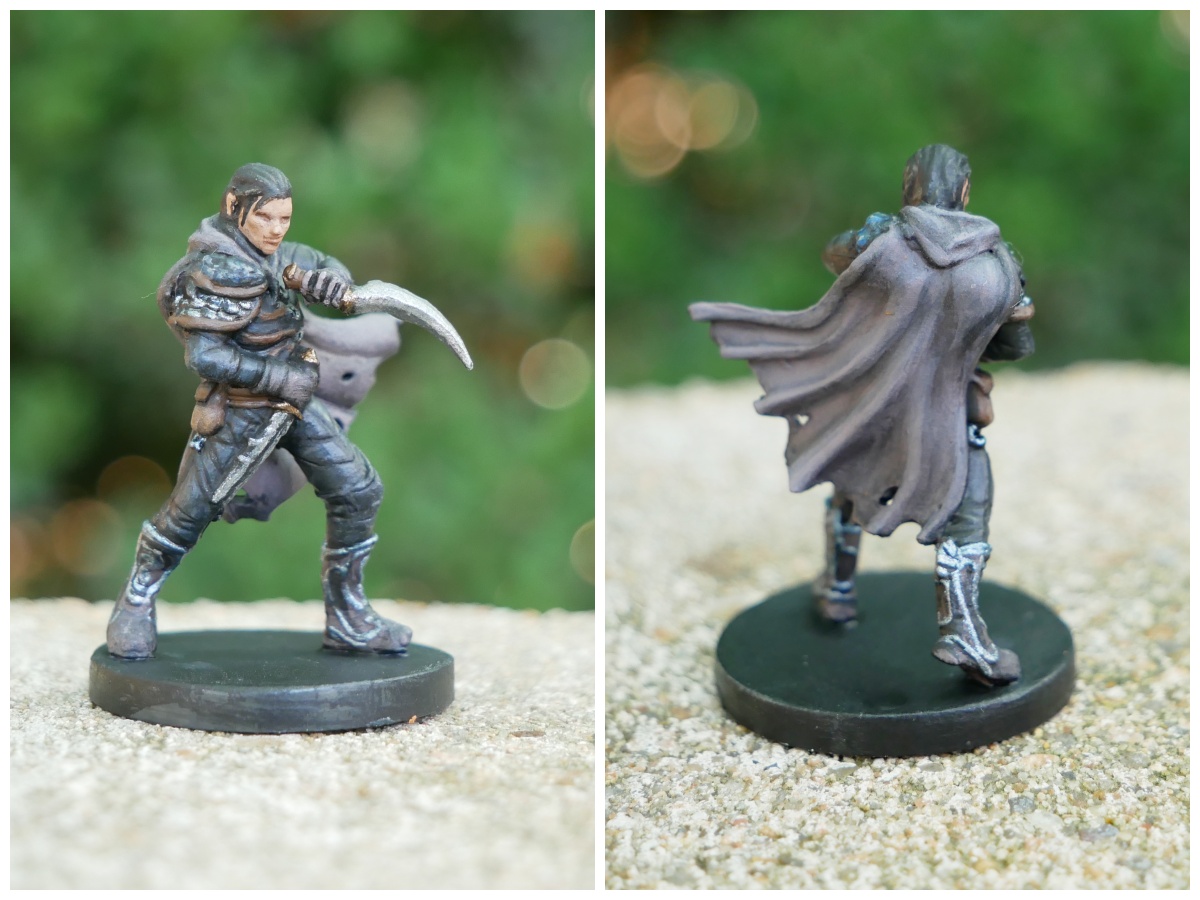 The Painted Vax Tutorial is posted, check the video out below! Otherwise, keep reading for tips, tricks, and reference photos.

This Painted Vax Miniature tutorial wasn’t filmed in action for two reasons. One, it was a pain (more on that in a moment). Two, I was watching the wedding episode while I worked on him and I didn’t want to he distracted, haha!

Manufacturing Flaws in My Vax Mini

I want to start by saying that I may have a botched mini and yours might not be so bad. I should have contacted Steamforged, I hear they’ve been excellent about replacing bad minis. But I didn’t so here it goes.

First, the flash lines were awful. Flash lines don’t normally bother me, they are easy to remove. But these were so bad that I lost detail because they were so thick. Though even without the flash lines, there was quite a bit of detail loss in general. Here is a photo of the prototype vs my actual mini before prep.

His ears were impossible to find so I faked them. The boots were OK on one section so I used that as a reference to fill in the other sides. And his dagger (on his hip) had no detail, I drew in some based on the prototype photo.

And last, his face. I had to cut off a large chunk of plastic on his nose (though maybe I should have cut more). Also his mouth is nearly nonexistent. I tried to do some different things with contrast and highlights to make it look better, but in the end, less was better. I ended up doing just a base color and wash and left it alone after that.

All that aside, I do have some tips for painting the Vax miniature. As you know, he’s a rogue, so he’s hidden in the shadows most of the time. But painting him all black will hide detail and make him look bland next to the rest of Vox Machina! Break up the colors with greys, blues, and browns.

Here is a photo of how I broke up the base colors. This might not be so obvious in the finish product. But those subtle differences are what break the parts up so it is more interesting to the eye.

I referenced the art from the Critical Role animated series to help me decide on a color scheme. His cape and boots have a purple tinted gray base color. I used a standard gray on his legs and arms. And blue for the fur bits, per the artwork.

All of these parts were ink washed with black. I added a little highlight after it dried using the base color again. I used brown to line some edges on armor and that really helped break it all up.

For the boot detail and and metal parts, I wanted to avoid and bright silver since he is a rogue. I used a dark blue metallic color I had, but even darkening your regular silver with an ink wash will do the trick. Speaking of which, that is how I painted the weapons.

The silver on the boots is certainly not necessary. In fact, it may look better all one color with a dry brush. I only have them extra love because they were the magical Boots of Haste. But since the detail is so rough in the sculpt, they didn’t turn out so great.

I did draw in some of the scalemail lines with black since it was missing in most areas. Just reference the prototype photo for clarity.

I have been compiling a playlist on Youtube of all these miniatures as I work through them. So far, Vex was my favorite to paint, her sculpt was beautiful. Well, Pumat Sol was also in great shape and quite fun.

I believe Scanlan is up next, which I am excited for because I so rarely get to use purple while miniature painting! I got Jester out of the way early because I knew people were struggling with her but I’d like to finish Vox Machina before moving on to the Mighty Nein.

That said, I just got Caduceus in the mail and his sculpt is absolutely incredible, it is so detailed. I’m so tempted to paint him next!

I hope these tutorials are helpful, I’m having fun making them! See you next time!